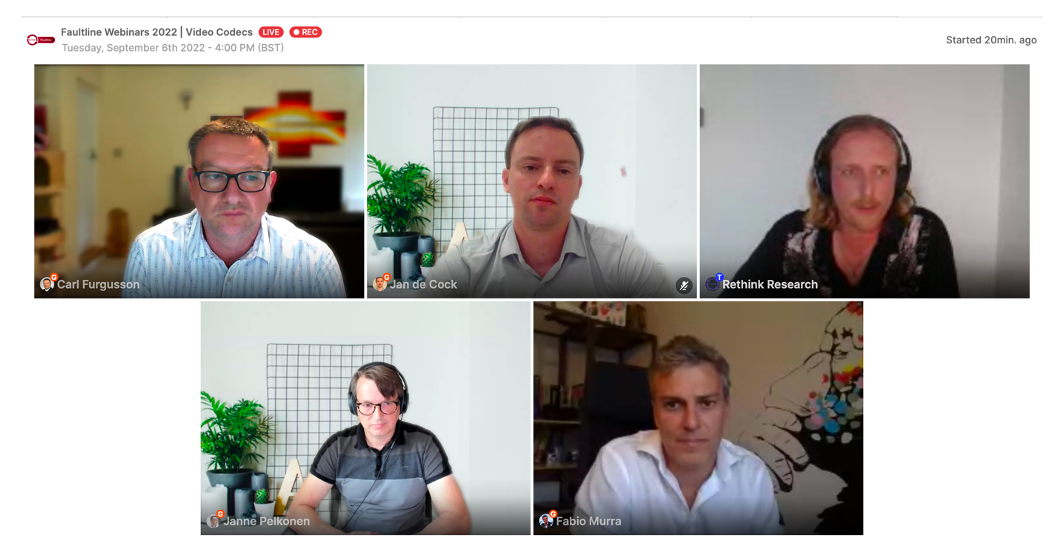 Ahead of IBC 2022, I joined a host of industry experts in an hour-long Faultline webinar to discuss the future of video codecs. We evaluated some of the essential features of Versatile Video Coding (VVC), Essential Video Coding (EVC), Low Complexity Enhancement Video Coding (LCEVC), and AV1 and considered where they might fit into various media ecosystems.

Today, there are more competing codecs than at any time. We watch more content, on more devices, from more countries and in different languages ​​– and video codecs have continued to evolve to meet these needs. There are unprecedented demands on video quality, resolution, fidelity and frame rate.

And there are also many different points of view! I, Fabio Murra (V Nova), Jan de Cock (Synamedia), Janne Pelkonen (IdeaNova) and our moderator, Tommy Flanagan, enjoyed an engaging and respectful discussion throughout our session – which you can watch on demand here.

What is the outlook for VVC?

One of the main takeaways I was looking to project is that VVC is currently the go-to codec. It is arguably the most efficient video coding standard available today. It dramatically improves compression performance and is especially important for high resolution and frame rate content of 4K/UHD and above. This is why we at MediaKind have focused our innovation development and research efforts on this codec, knowing that through these efforts we could also implement EVC if there is sufficient market demand due to the similarity between the two codec designs.

The roadmap for VVC adoption is already in place as it will be fundamental to enabling future formats, such as 8K broadcasts. The first chipsets with VVC decoding and for 8K TVs have already been announced, while the wider rollout of devices supporting other codecs (which had been standardized earlier), such as EVC and AV1, has been affected. by COVID and silicon implementation and supply chain challenges.

VVC is also currently implemented in the latest broadcast standards, such as SDTVD in Brazil and Digital Video Broadcasting (DVB) has also become the first such standards body to add VVC to its base specification for implementation. video and audio encoding in broadcast and broadband applications. . While VVC will be essential for 8K video, it can and will be relevant for lower video resolutions as well. In the first part of this blog, my colleague Julien Le Tanou explains how MediaKind successfully deployed and validated a full ABR profile scale for a live OTT UHD channel using VVC with Aquila Streaming, using MediaKind’s aaS platform on Microsoft Azure.

Given its inclusion in next-gen broadcast standards, the path forward for adoption of VVC in broadcast seems clear. VVC will open the doors for broadcasters to achieve significant spectrum savings, enable greater connectivity and ultimately broaden the adoption of 4K content – ​​and especially 8K.

The future landscape of codecs for streaming

A codec that was created to become the format of the future more rapidly was EVC (Essential Video Coding). However, as our panel discussed, this has not been the reality. The development of EVC was an attempt, in 2018, to conduct an accelerated standardization exercise with a limited number of companies involved. Some of the points raised about EVC during the webinar were whether EVC will be suitable for specific use cases that VVC and AV1 will not already cover.

For example, as my fellow panelist Jan mentioned, AV1 doesn’t have ubiquitous support when using an internet browser as a decoding device. So this blocks other industry use cases where AV1 might otherwise be adopted, so another codec might have a bigger impact if it can get ubiquitous decoding support across all devices. and browsers.

Despite delays in chipsets for battery-efficient hardware, the accelerated adoption of AV1 decoding across major social media and streaming platforms will allow it to have a place in device decoding capabilities and the landscape. streaming codecs; at the very least for non-live on-demand content.

For live streaming, there is a strong desire to achieve widespread use of a common unified codec, as we have with MPEG-4 AVC today, for both the HLS and DASH worlds. Realizing such a wish will require the adoption of one or more of these next-generation codecs in HLS specifications and in future Apple phones and tablets. The backing of such a big player in the industry will surely define the direction of the streaming codec landscape.

The issue of sustainability

An issue that concerns all codecs is the ability to ensure that users can continue the industry-wide effort to be more sustainable. Greater workflow efficiency inherently leads to better sustainability. For example, newer codecs, such as VVC, can reduce bitrate and bandwidth consumption, which ultimately leads to a lower carbon footprint. This is due to a reduced requirement for storage, streaming capacity, and caching. Just-in-time operations can also reduce CO2 emissions in energy consumption and costs.

Reducing bitrates will likely require fewer profiles (i.e. the number of different resolution and bitrate versions of the video) required in the ABR scale. This will to some extent offset the total computation required against current processing needs.

Codecs have a bad reputation when it comes to durability due to statistics such as “each new generation comes with up to 10x increase in computational complexity”. This is certainly a gray area, as this statement assumes that all available tools of a new codec standard will be fully utilized to achieve the maximum throughput savings possible. Using slower-than-real-time encoding would be plausible in the first implementation of file-based processing.

However, for live coding, the implementation must operate in real time with a finite amount of processing power; either the CPU capacity of an on-premises physical server or the node sizes available from cloud service providers. Early real-time encoding implementations will use less computational power by using a subset of the new codec’s toolset while trying to achieve the best possible bitrate economy; it’s the “secret sauce” magic of live encoder vendor implementations.