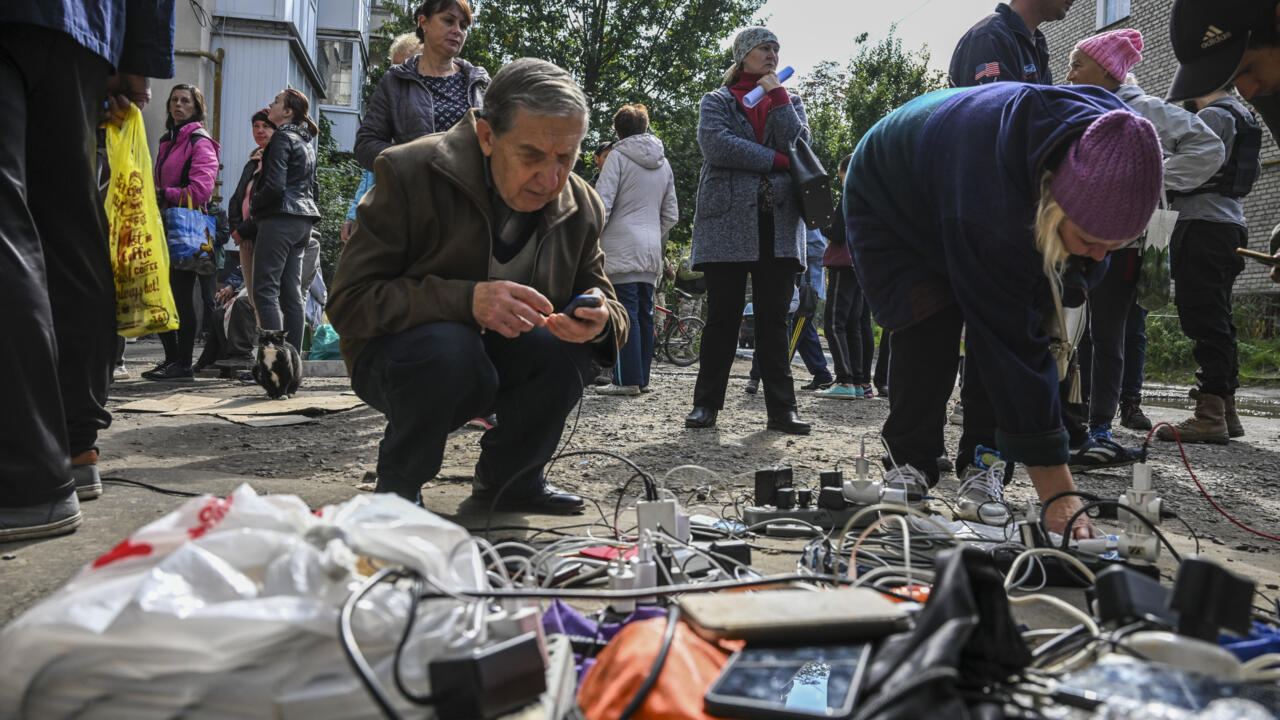 Izyum (Ukraine) (AFP) – Cut off from news and contact with the outside world during six months of occupation by Russian forces, residents of recently liberated Izyum are grateful to have a makeshift Wi-Fi hotspot in the ruined Ukrainian town.

Outside a building, dozens of people line up in front of a sign that says ’15 minutes of wifi’, where an aid worker picks up each phone and enters the password.

Izyum, a predominantly Russian-speaking town of around 50,000 before the war, was fully occupied from April until it was recaptured earlier this month during Kyiv’s lightning counteroffensive.

Shortly after liberation, investigation teams discovered what they said were 447 bodies buried during the occupation.

Residents told AFP on Thursday that with power grids and mobile infrastructure badly damaged during the fighting, and still unrestored, the lack of information kept them in the dark about what was happening.

But thanks to an army-supplied generator, they can now reconnect to the internet – at least for a brief window each day.

“If too many people go online at the same time, the internet goes down, hence the 15-minute limit,” said resident Olga German.

“After zero minutes a day, 15 is a lot. Now we can check the news online, compare sources and keep in touch with our families,” said the 34-year-old English teacher.

The eight-storey block is one of the few buildings in the devastated city to emerge relatively unscathed, although many windows are smashed, with the sound of sawing and hammering emanating from many floors.

A TV screen on a stand next to the queue showed a Ukrainian channel broadcasting news about the war, while people huddled on the ground charged their phones using extension cords connected to the generator.

Around the corner, a half-torn poster hung on a billboard: “Russia forever,” it said.

“We lived in an information vacuum, we couldn’t get in touch with our relatives and we could feel that the information we were getting from the Russians was not objective.

“So we lived on gossip, and the stories got twisted.”

Nadezda Oleksandrivna, a 64-year-old dog trainer waiting her turn in the queue, said being deprived of news and contact with friends was “like having a bag over your head”.

This could have a serious impact on mental health, she added.

Oleksandrivna said she stayed in Izyum during the occupation because she didn’t want to give up her two dogs.

Before the war, she was an avid internet user, keeping up to date with relatives, bloggers, politics and international news.

Now she said she gets around the 15 minute wifi limit by going back to the bottom of the line when her time is up.

For a group of teenagers scrolling their phones around the corner, the wifi spot is an opportunity to catch up with friends on Viber and Telegram.

“Everyone started messaging me, including friends I have in Germany and the Czech Republic, they were really worried about me,” said Anton, a 16-year-old resident.

“When I first got connected again, I didn’t know what to do, I noticed that my TikTok had really changed.

Russian journalists are silenced to stifle reporting on protests